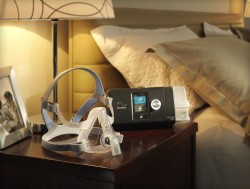 What is sleep apnea?

Sleep apnea is a common but dangerous disorder where someone does not get a restful sleep at night due to his or her breathing stopping throughout the night.  The pauses of sleep can range anywhere from ten seconds to even a few minutes at a time and thus puts them at risk to serious health risks.  CPAP machines and therapy is an effective treatment for the condition, it will use a breathing machine to push additional oxygen into your system to prevent you from stopping breathing.

There are three main types of sleep apnea: obstructive, central, and mixed.

What are the symptoms of sleep apnea?

Typically, you don’t know you have sleep apnea until someone notices you snoring loudly or you start to feel fatigued throughout the day.  Most people will ignore the symptoms as them just not getting a good night sleep but when you find yourself falling asleep while driving or working you should not ignore those symptoms and go to a doctor right away.

The common symptoms of sleep apnea include:

To treat this condition effectively, it is essential to consult a good sleep disorder clinic and a doctor before starting the CPAP therapy.